Since all my assets are done in MagicaVoxel, I need to convert everyone of them to a png file for each of the 4 angles. I the past, I would take a screenshot manually and it took a long time. I decided to look at the command lines and found they have a nice feature odir iso and there a nice config file. 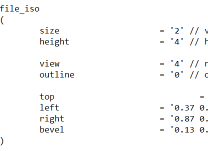 Changing the view setting to 4 gave me the all four angle.

That was perfect! Saved me a lot of time. But then I notice that the image are "optimized" for space. There was no way to know here the asset is position in the bounding area of the cube. Here's an example, there's no way to know where the head is compared to the cart when I want to draw both. I really wish there was a setting for that, to export similar to the screenshot feature. 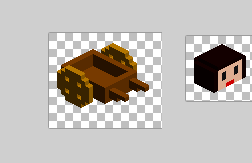 After search a bit, I found IsoVoxel. It's command line, take a .vox file as parameter and generate a bunch of images in different angle. Perfect!

The only problem is the lighting. It doesn't display the image as well as MagicaVoxel but that'll be ok for now. When the assets will be complete, I'll take a day to take screenshot of each.

Secret of the Basilisk

IDLE, incremental game with a bit of a story.