Previously, all assets for people were one image. I really like how Magicite did their animations and wanted something similar. I also wanted to add the ability to have different items in the hands of people. Keeping it like it was, I would’ve ended up with thousands of image with a lot of repetition (main player with hands empty, main player with a stick, main player with a sword, …).

The solution I decided to go with was to split each person into 6 different pieces (head, body, arms, legs). This will also allow me to mix up people more easily (put the same shirt on different body).

Since, for example, all left legs will have the joint at the same location in all pictures. I can automate a rotation of the leg to create a walking animation. In the previous version of the game, character animation was not possible unless I had a full picture of the character for each animation.

Before, once image for the whole asset.

Now, everything is spitted. 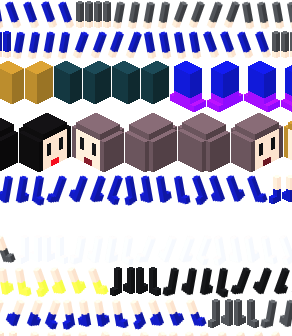 Secret of the Basilisk

IDLE, incremental game with a bit of a story.